INDOT will close a portion of North Gem Rd at US 52 starting on Wednesday, July 29 in New Palestine.

The closure will last approximately one week. US 52 and South Gem Road will remain open to traffic.

The construction zone will span approximately 100 feet from US 52 traveling north. Southbound traffic on Gem Road will have access to Mill and Walnut Streets as well as the entrances to CVS and Brew 52.

Indiana Republican Party Chairman Kyle Hupfer has officially called a caucus of eligible precinct committee members to fill the upcoming vacancy in the office of House District 88. The seat is currently held by former Speaker of House Brian Bosma, whose resignation from the Indiana House will be effective July 31, 2020.

The individual selected at the August 19 caucus will fill the remainder of former Speaker Bosma's term.

"Former Speaker Bosma has served Hoosiers for more than 30 years, helping grow Indiana into the fiscal envy of the nation," said Hupfer. "Hoosiers will miss his leadership, and there's no doubt that the new representative for this district has big shoes to fill."

Individuals interested in running in the caucus should contact the Indiana Republican Party Secretary at dzagone@indiana.gop to ensure they file the proper forms prior to the deadline, which is 72 hours prior to the vote. The caucus will be open to credentialed media who pre-register to Holly Lawson at hlawson@indiana.gop prior to 5:00 p.m. ET on Tuesday, August 18.

A Facebook Live Stream will be available at www.facebook.com/indgop for members of the public who wish to watch the caucus live. More details regarding caucus procedures and candidates will be released after the filing deadline.

As schools across the state prepare to head back to the classroom, one Hancock County school district is pumping the brakes on a return.

The Mt. Vernon Community School Corporation decided Monday to delay the start of school by more than two weeks due to concerns over COVID-19.

Rather than starting July 29, the district is now slated to begin classes Aug. 17 and the decision will impact students who attend in person and virtually.

Furthermore, the district shortened fall break by a week and extended the school year into June.
While Mt. Vernon has opted to push its start date back, the other three districts in Hancock County are slated to return to the classroom on their normal dates, as of now.

The Community School Corporation of Southern Hancock County will offer both traditional and virtual learning to students this year and is set to return Aug. 3.

Greenfield-Central is set to return July 30.

Greenfield-Central Schools officials have recently announced the district’s plans for re-entry into schools on July 30 for full-time instruction.

Families opting for a traditional setting will send their students five days a week, regardless of grade.

Students and families who decide on the virtual program option will commit for a semester.

All staff will do a required self-screening for COVID-19 symptoms, while it is recommended for students.

Should the school district have a positive case, the school corporation will consult with the department of health, rooms in which a positive case occurred will be closed immediately for an extensive cleaning and a school may be closed if close contacts cannot be identified.

More information regarding Health and Safety can be found on our school website at  www.gcsc.k12.in.us.

Furthermore, the entire day will have a different look to it as students and staff will be expected to have a mask with them at all times. When social distancing is not possible, masks will be required to be worn. There will be an emphasis on extra hand washing and hand sanitizer will be readily available. In addition, all schools will be professionally cleaned nightly and buses will be cleaned between morning and afternoon routes. Meals will be served in the cafeteria and consumed in alternative locations. Visitors to the building will be restricted.

Wes Smith can sum his feelings up with only one word – surprised.

The McCordsville resident’s surprise comes from a letter he says he received that discussed his African-American race and a birthday party he hosted a year ago.

The letter, which was handwritten, was addressed from the Neighborhood Assoc and the author tells the Smith family they “took time out of their busy day” to write the letter and they speak for the entire neighborhood.

“My wife and I were surprised, especially with having to wait for an entire year to hear from whoever it was,” Smith told Giant FM.

In the letter, the author states they remember a 30th birthday bash that featured loud music and a loud posse.

“I could not be more disappointed to be living next to a black family,” the author wrote.

The author writes that they do want that to happen again and asks the family to reconsider.

“We do not want to bring what is going on in the city to our peaceful town. Think about it, digest it, and be a good neighbor. Do not go disturbing the peace, or we will be forced to shut it down. Thank you,” the author wrote. 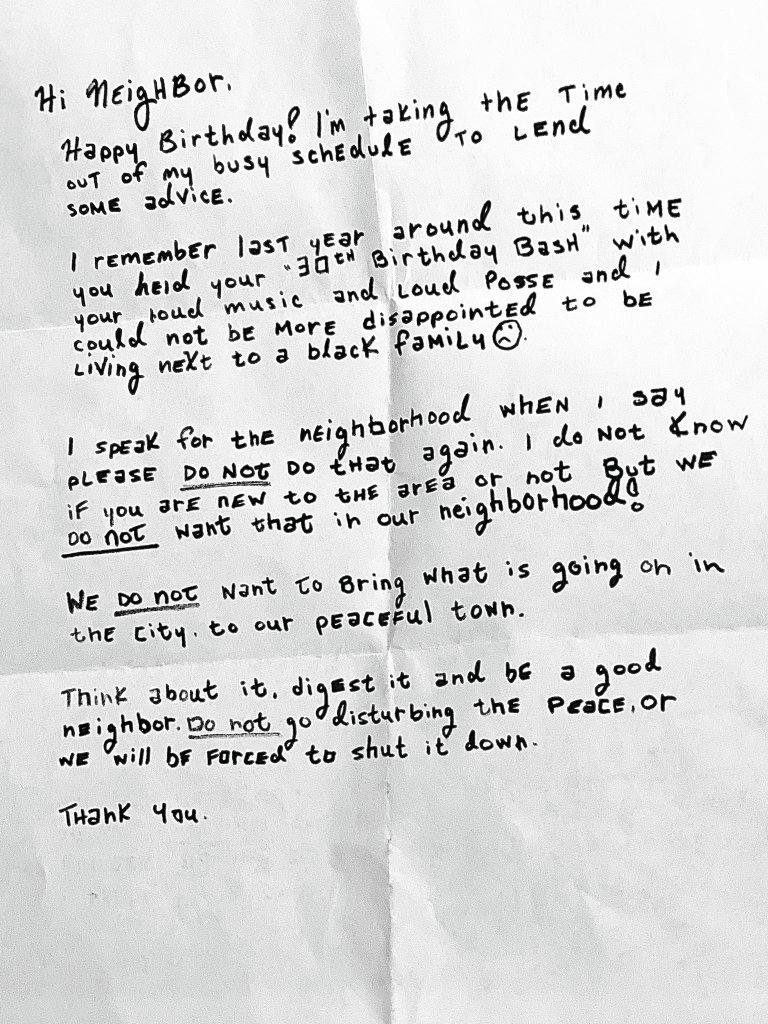 Smith tells Giant FM that everyone knew about the birthday party, it was posted on a community Facebook page and the family asked for forgiveness beforehand due to having a DJ, cars, etc.

“We kept it between the hours of 2-6 out of consideration for bed times and children, but we thought we followed what would be typical protocols to keep everything cordial. We invited some of the neighbors over, but we received not one complaint, and most everybody said they had fun and enjoyed my birthday,” he said.

Smith said his family has not had any issues in regards to racist activity from others.

“We know of others in the neighborhood that have certainly had run-ins, however,” he said.
Despite the letter, Smith said his family is not concerned.

“We are going to continue to live our lives. We’ll send out another mass message out to the neighborhood for an invitation over to the 31st party,” said Smith, adding the McCordsville Police have been tremendous and are investigating the incident.

The letter is a “teaching moment,” according to Smith for whoever sent the letter and those who question the validity of the letter.

“My wife and I even hesitated to not only report this to the police, but also do any sort of interviews for this. Immediately once the media posted about it, it was, naturally, all over social media, which opened doors to everyone’s rightful opinions, whether they were right or wrong. And, I think that’s what hurts the most. The lesson lies with looking at yourself and finding out who is the problem. You don’t want to be caught on the wrong side of history – the side that believes racism doesn’t exist anymore, the side that believes blacks are seeking attention, the side that believes Black Lives Matter means “ONLY” Black Lives Matter. It’s disheartening to say the least that now this has been brought to my doorstep and my family is now up for the court of public opinion,” Smith said.

However, he tells Giant FM those incidents will not stop him.

“This doesn’t take away my newfound drive to educate those that are uneducated about racial injustices and the fact that it runs rampant in our once peaceful town. The community, my neighborhood, my immediate neighbors who have shown love, my wife and I have been overwhelmed on that side of the fence. It’s been amazing the number of people that have reached out to us. They’ve let us know they stand by us, the support whatever we need, and they are coming to the next party, which is awesome,” Smith said.

And, he has a clear message for those who wish to deter him.

“We’ll be here in McCordsville for some time to come and will leave on our own accord when we very well please,” Smith told Giant FM.

Masks, social distancing and keeping students enrolled and safe are the main points of a strategy by the Community School Corporation of Southern Hancock County to reopen its schools.

The district recently unveiled its blueprint for reopening, aimed at having students, teachers and staff back in the buildings on time for the beginning of school. The blueprint can be found at www.newpal.k12.in.us/News/252.

The blueprint had nine initial goals – have students attend school safely; maintain compliance with social distancing recommendations by limiting interactions outside the classroom; focus on instruction of essential content; provide for intervention and acceleration of students through quality instructional design; support the social-emotional wellbeing of students as they re-enter; resume face-to-face meetings for students with specialized services; move seamlessly between in-person instruction and virtual programming in the event of a shut down; be responsive to parent, teacher and student feedback to create an instructional model conducive to engaged learning; and create consistency for processes and procedures of virtual learning at all grad levels.

Families within the district will have two choices on how to go back to school.

The schools will reopen to students on August 3 for in-person learning. In addition, families may enroll their student in a virtual school program to receive education from home. The program will be different than the E-Learning period during the spring and will be an entire school day.

In addition, the blueprint strongly encourages students to wear face coverings at school and students will have assigned desks. Furthermore, there will be no community school supplies, desks will be washed and disinfected and some students will eat lunch in their classrooms.

“As with any blueprint in the construction world, changes to this plan may need to occur before  or during the school year. These changes will be communicated through our normal channels -  email, the ?district website?, ?Facebook?, and ?Twitter?.     On behalf of our entire district team, I want to thank our community for their flexibility and  support during the COVID-19 pandemic. We all feel incredibly grateful for an engaged  community committed to exceptional public education and the safety of everyone involved in  our schools.    We can’t wait to see your students again on August 3. We are excited to start 2020-21 with  students back in the classroom,” superintendent Dr. Lisa Lantrip said.

While the deadline for Democratic candidates to join the race expired this week, third-party candidates have until July 15 to throw their hat in the ring.

With that news, that means Republicans are slated to hold onto superior court seats, commissioner seats in districts 1 and 3, coroner, and county council at-large.

Earlier this summer, David Stillinger held off a challenge from Joe Fortner in the Republican primary for Coroner.

For county council at-large, Republicans Kent Fisk, Robin Lowder and Keely Butrum all advanced out of the primary.

Incumbent and Republican Michael Crider faces a challenge from Democrat Theresa Bruno for Senate District 28, which includes both Hancock and Shelby counties.